I walked to and from town last week and on the return journey I was very surprised to see a Goldcrest in the bushes by the side of the road.  It was probably a female as males have a more orange crest.  This is the UK’s smallest bird and although not actually rare, in fact the native population is boosted in the winter months by birds from the continent, it is more often found in coniferous woodland than beside the busiest road in town.  She was busy searching for  small spiders and insects among the bare branches. This sighting really made my day and I wish I had managed to take better photos with my phone. 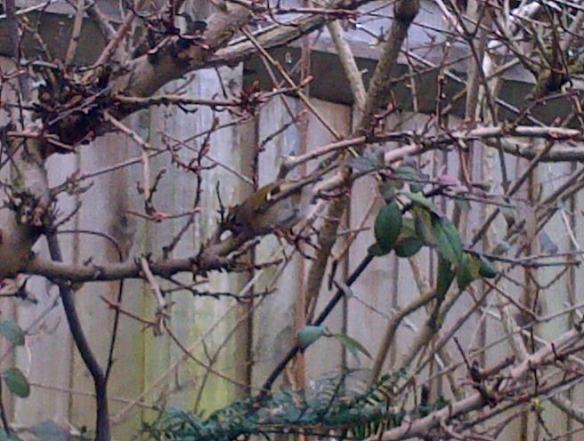 I was walking the dog along a sheltered path by the railway line on Sunday and saw quite  a few Brimstone butterflies.  I think this means Spring has finally arrived folks!  Having said that in a normal year you can often see an occasional Brimstone on the wing in late February or early March in Southern England – however this is not a normal year and the sight of so many on the wing cheered me up no end.  Typically I never had my smartphone with me – although I didn’t really feel energetic enough to run after them for a good shot anyway!  They appeared to be all males: the males have yellow wings, hence the name, while the females are off white.  It is believed, realistically I think, that the word butterfly is derived from the males of this species

Our Forsythia bush began to open its buds over a week ago and I notice plants all over town are well out now.  Although it is depressing in a way I quite like it when the flowers begin to fade as by then the leaves are showing and the combination of pale green and warm yellow is very attractive.

Forsythia on a bank

Incidentally, my wife’s front border which I photographed  a bit earlier is looking even prettier now after the rain at the weekend.  However in our large garden at the back of the house the weeds are growing alarmingly fast for the same reason.  I am not sure when I will get round to attending to them as I have to clean out the fish pond over the weekend and I really must start potting.  The turtles do eat the dandelions but unfortunately not in suitable quantities!  The rabbit only eats the flowers – we have the fussiest rabbit on the planet!

The greenhouses are looking a bit untidy at the moment as I am starting  to sort out some plants and repropagate those that need it.  I am hoping to start potting earlier this year.  The last few years I haven’t begun until May, which is far too late really (with the possible exception of mesembs which grow until late in the year).

A lot of plants are beginning to grow now and more are in flower.

Forgotten what Genus this! It is Bergeranthus or similar 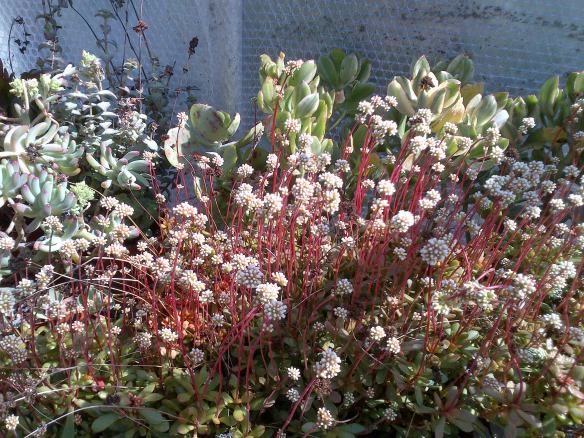 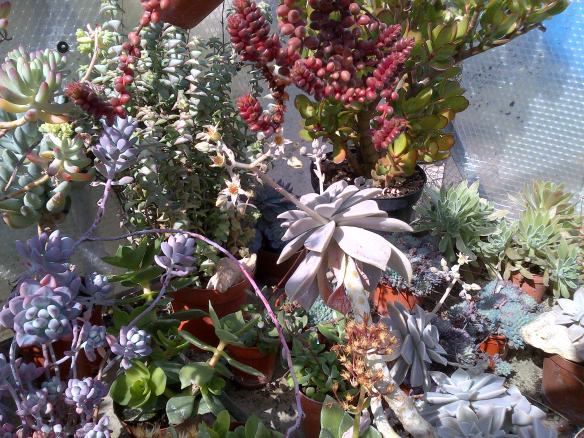 Echeveria derenbergii – smaller form. In the old days I did have a larger form as well which I would like to get back

Aloe Variegata – I lost one last year so I have kept it drier this season. Indoors they are impossible to kill but in the greenhouse they suffer if too damp 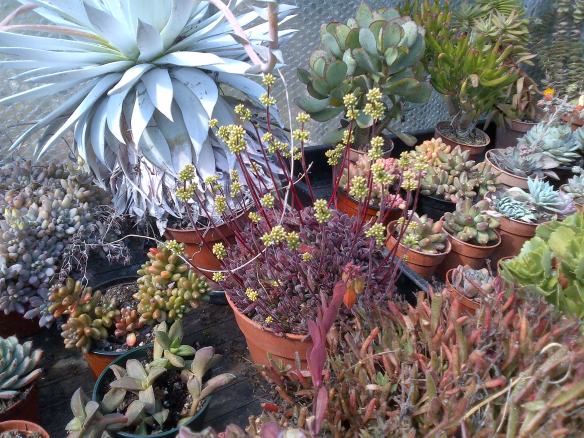 My wife June looks after the tiny front garden of our rented property.  It really is small with a large cherry laurel hedge at the front and our neighbour’s shrubs to the side.  The soil is extremely poor but we are doing our best to improve it.  The borders in front of the bay window and in front of the hedge tend to be a bit dry particularly in the summer months, however there is a nice show of spring flowers at the moment despite the bad weather – hopefully it will be even better next year. 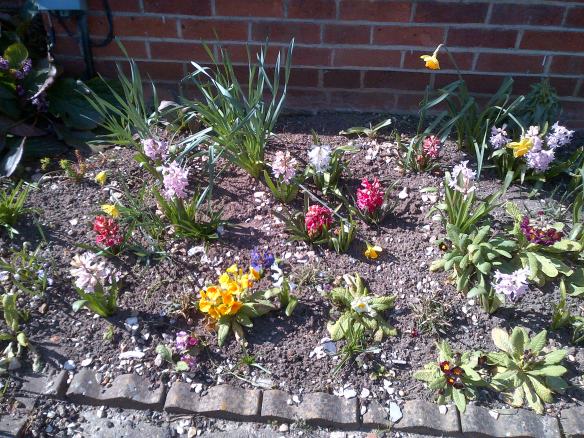 Cherry Plum (Prunus cerasifera) is usually the first cherry to come into bloom in Southern England.  It starts flowering at the beginning of March and in a normal year indicates the imminent arrival of nicer weather.  Not this year however!  It is still desperately cold at the beginning of April with light snow again today and a bitter wind which would feel almost too chilly in January.  For two weeks running the UK met office has forecast milder weather for the approaching weekend and both times they have subsequently amended the information.  They are now saying it may get slightly milder during next week – the phrase believe it when you see it comes to mind!

Anyway the cherries remain in bloom. this one is just down the road. 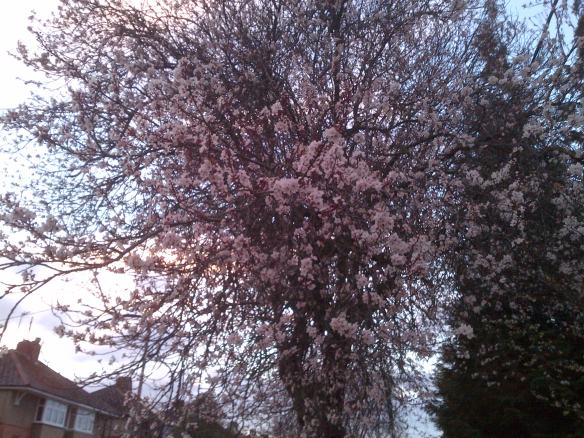